Residence in Italy during transition period

Posted by Charlotte Oliver on May 12, 2020 in IMMIGRATION AND NATIONALITY LAW UPDATE

This post sets out the rules for British citizens already resident in Italy, and also aims to give some guidance for those hoping to apply for residence in Italy during the post-Brexit transition period.

The UK ended its membership of the EU on 31st January 2020, under the terms of the Withdrawal Agreement concluded on 19th October 2019.

We are currently in the transition period, during which time all EU law is still binding in the United Kingdom and applies to British citizens resident in Member States. The transition period is due to end on 31st December 2020, however we note there is the possibility for this to be extended for “up to 1 or 2 years” if an agreement is reached between the EU and the UK before 1st July 2020.

Chapter 1 of the Withdrawal Agreement deals with citizen’s rights and, in particular, the right of residence in EU member states (Articles 13 – 23).

The Withdrawal Agreement permits EU countries to treat the rights of British citizens and their family members who were already resident in member States before Brexit, in one of two ways.

Italy fortunately adopted the simpler of these, the “declaratory” procedure, which means British citizens already resident in Italy pre-Brexit do not need to apply for residence again from scratch. The “declaratory” procedure enable British citizens already resident in Italy to simply exchange their present certificate of residence for a new document declaring the continuation of their existing status and all rights which this conferred.

The Ministero dell’Interno (Italian Home Office) issued a guidance note Circolare n. 3/2020 in February 2020 . The Circular sets out the contents of the new residence document, which is named “Attestazione di Iscrizione Anagrafica” (a template is shown here). 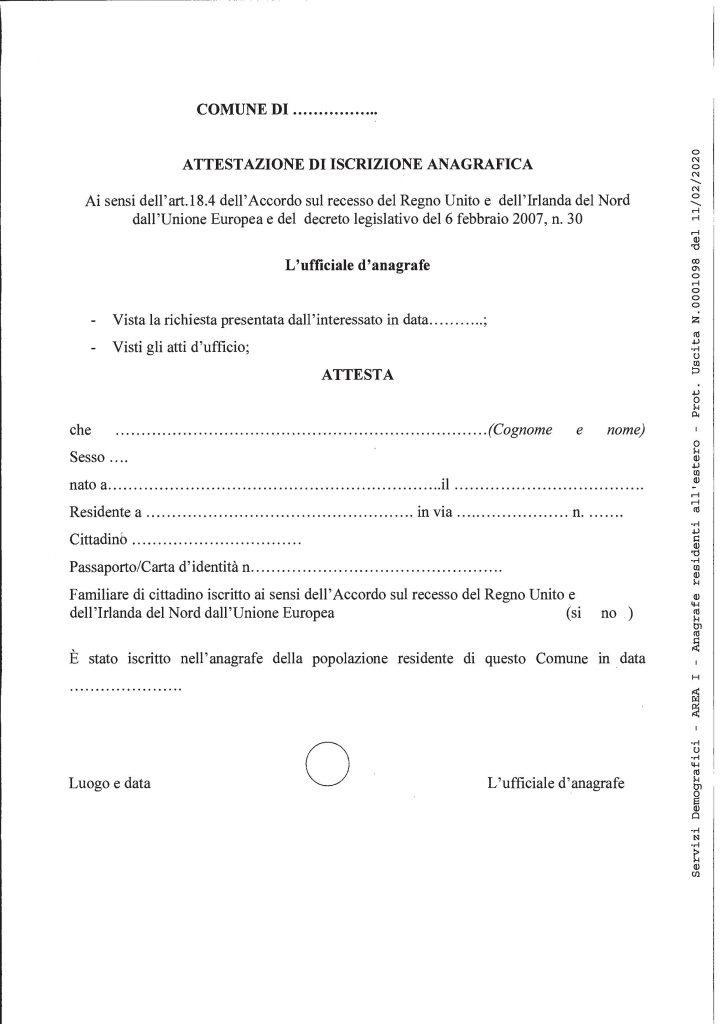 From 1st February 2020 British citizens already registered as resident may  attend their local Comune to request this new document, simply by showing proof of ID.

As at the time of this guidance note, it has not been clarified whether this new document is actually mandatory, or if there is a time limit by which to apply for it. In the meantime, it is likely that a simple “certificato di residenza” should be sufficient to demonstrate a British citizen’s current status in Italy.

There is also a lack of clarity regarding the “Attestazione di Soggiorno Permanente” during the transition period. Many long-term British residents may have already applied for this document in the past after 5 years residence.  We understand that the Ministero dell’Interno has issued guidance to Comuni to refuse to issue this document post-January 2020, although this decision may be unlawful and is being challenged.

It should not be necessary for a person to hand in their Attestazione di Soggiorno Permanente on being issued with the new “Attestazione di Iscrizione”, however we understand this has happened on occasion, and guidance is also needed on this.

British citizens not resident in Italy at 31st January 2020

An application for residence made before 31st December 2020 must be made on one of the grounds set out in Article 7 of the Free Movement Directive.  The British citizen must therefore show that they fall into one of the following categories, and provide documentary evidence that they:

(a) are workers or self-employed in the host Member State;

(b) have sufficient resources for themselves and their family members and have comprehensive sickness insurance cover in the host Member State;

(c) are students enrolled at a private or public establishment and have comprehensive sickness insurance;

(d) are family members accompanying or joining an EU citizen who satisfies the conditions referred to in points (a), (b) or (c).

They must provide proof of the address where they are living and permission to residence there (tenancy agreement or ownership) and their presence will be checked by the Municipal Police.

Once registered with the Comune, new residents will be issued with the “Attestazione di Iscrizione Anagrafica”.

The British Embassy in Rome has published guidance on the new rules which can be consulted here: https://www.gov.uk/guidance/living-in-italy

The Free Movement Directive and rules for EU citizens applying for residence in another member states was implemented in Italian Legislation in Legge no.30/2007.

This website uses cookies to improve your experience while you navigate through the website. Out of these, the cookies that are categorized as necessary are stored on your browser as they are essential for the working of basic functionalities of the website. We also use third-party cookies that help us analyze and understand how you use this website. These cookies will be stored in your browser only with your consent. You also have the option to opt-out of these cookies. But opting out of some of these cookies may affect your browsing experience.
Necessary Always Enabled
Necessary cookies are absolutely essential for the website to function properly. This category only includes cookies that ensures basic functionalities and security features of the website. These cookies do not store any personal information.
Non-necessary
Any cookies that may not be particularly necessary for the website to function and is used specifically to collect user personal data via analytics, ads, other embedded contents are termed as non-necessary cookies. It is mandatory to procure user consent prior to running these cookies on your website.
SAVE & ACCEPT
2012-2022 Oliver & Partners
Piazza Capranica 78 · 3rd Floor · Roma · 00186 · ItalyTEL : + 39 (06) 361 4115legal@oliverpartners.it