Posted by Charlotte Oliver on Apr 26, 2016 in LEGAL UPDATES 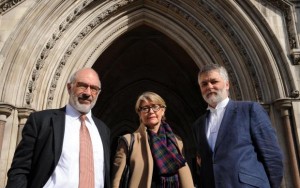 The case brought by Harry Shindler and Jacquelyn Maclennan in the High Court for Judicial Review of the Referendum Act 2015 was heard on 20th April 2016 in front of Mr Justice Blake and Lord Justice Lloyd Jones in Court 3 of the High Court. The Claimants were represented by Leigh Day Solicitors. Counsel was Aidan O’Neill QC.  Claimant Jacquelyn MacLennan was present at the hearing but Harry SHindler was unable to travel from Italy.

Aidan O’Neill QC said on behalf of the Claimants that they were put at a disadvantage by losing their right to vote after 15 years, and this was a violation of the EU Treaty and interferes with the right of free movement. The Claimants are not in fact “expats” but British citizens who live in other member States of the EU, and by virtue of that they are also EU citizens.

The case hinges on an interpretation of recent ECJ caselaw, (and in particular the case of Martens C-359/13) on whether in every situation which is argued to restrict free movement there must be considered to be an actual deterrent to others from exercising the same rights. The Claimants argue that this is not possible or necessary in a one-off situation such as the EU Referendum, but that it is an alternative ground to show that there has in fact been a penalisation of them for having left their member state of origin even though they have a right to do so. On behalf of the UK government James Eadie QC argued that in caselaw of the European Court of Human Rights, including the action brought by Harry Shindler the Claimant in this case, the 15 year rule had been held to be a proportionate measure in pursuance of a legitimate aim. The Claimants’ legal team argued that the ECHR was not relevant here, the right to vote as enshrned in Art 3. Protocol 1 of the European Convention of Human Rights refers to parliamentary elections to choose the legislature, not a Referendum. The court said that it would issue a judgement in the next few days.

Full report on the hearing in the Telegraph, see link below to the article:  EU referendum_ voteless expats being punished for exercising freedom of movement, High Court hears

See also the Facebook page managed by Charlotte Oliver for the background and a link to the pleadings: https://www.facebook.com/judicialreview.expatsvote/