Posted by Charlotte Oliver on Jul 11, 2022 in LEGAL UPDATES

The right to vote, for all British citizens resident outside the UK, has finally been restored this year by the Elections Act 2022.

The vote for overseas electors had been restricted in 2002 to include only British citizens resident outside the UK for less than 15 years. After that cut off point, British citizens living abroad were no longer eligible to participate in UK general elections, irrespective of whether they still had close ties with the UK.

Section 14 of the Elections Act 2022 allows “overseas voters” to register to vote in the UK. The requirements are that they must be a) a British citizen and b) must have been previously resident in the UK at some stage. There is no longer a requirement that they have lived outside the UK for less than 15 years. Any British citizen abroad may register to vote in the UK constituency where their last address is located, or in the constituency where they were last registered on the electoral roll.

This should, it is estimated, restore the democratic vote back to about 2.3 million British citizens abroad.  The restoration to the franchise should become a reality in practice before the next UK general election due in 2024.

The passing into the statute books of the 2022 Election Act follows many years of determined campagining led by by former British Army veteran Harry Shindler who lives in Italy. Harry Shindler received an MBE and OBE for his campaigning work on behalf of British citizens living abroad. He celebrated his 101st birthday on 17th July 2022 and held a party in Porto D’Ascoli for his family and fellow campaigners! 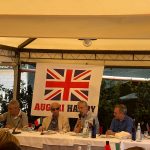 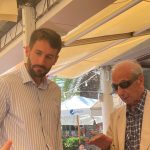 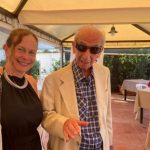 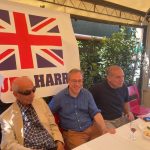 History of the campaign by Harry Shindler

Having discovered he had lost the right to vote in UK elections, after retiring to Italy with his Italian wife, Harry took his case to the European Court of Human Rights in 2011, represented by his Solicitor Charlotte Oliver. He claimed that the UK was in breach of Art. 3 of Protocol 1 of the European Convention of Human Rights which states that “free elections will be held which “will ensure the free expression of the people in the choice of the legislature”.

He argued, unsuccessfully in this case, that the UK Government failed to recognize the reality of  nationals living abroad and the extent to which they remain closely involved with their country of origin, particularly in the context of the growing exercise by EU citizens of their rights of free movement and rights of establishment as set out in the Treaty on the Functioning of the European Union (“TFEU”).  He claimed that most democracies around the world allow all citizens, wherever they live, to continue to be part of the franchise of their country of their nationality. For many reasons British citizens moving abroad may not meet the requirements to become a citizen of their new “host” country, which would mean they are not able to vote there either.

The European Commission then took up the issue of the right to vote abroad for British citizens, recognising that the 15 year restriction punished British citizens who, having exercised their right of free movement to live and work in the EU, demonstrated a continuing interest in the political life in the Member State of which they are nationals. A Recommendation was published in 2014 urging any member states who restricted the voting rights of their nationals to consider amending their legislation.

The 15 year rule was applied even in the Brexit Referendum, despite a further unsuccessful legal challenge made by Harry Shindler and the Brussels Solicitor Jacqueline McLennan. The challenge reached the UK Supreme Court a month before the Referendum in June 2016. The 15 year restriction excluded from the Referendum franchise an estimated one million British citizens living and working in the EU. Those potential voters had the most experience of the benefits and advantages of European citizenship, and would then suffer the consequences of the loss of that citizenship. EU citizens living in the UK (an estimated 3 million at the time) were also exclusded from the franchise in the Referendum.

Removing the 15 year rule became a manifesto pledge by the Conservative party in 2015 and took a further 7 years from then to become reality this year.

Harry Shindler at the European Commission